Home - News - ‘Necessity entrepreneurs’: Why the pandemic fueled a rise in female founders

‘Necessity entrepreneurs’: Why the pandemic fueled a rise in female founders

This is Working Together, a weekly series on professional women and equity in the workplace. Below is the second in a three-part series examining how the pandemic has impacted the careers of women. Check out Part 1 and Part 3.

When Sara Kosiorek landed a director level job at the Mayo Clinic in 2019, she figured she had entered the stable, secure portion of her professional journey.

And after spending more than two decades in the chaotic world of communications — including roles in broadcast and marketing — Kosiorek said she thought Mayo would bring her a sense of purpose she couldn’t find earlier on in her career.

The pandemic had different plans.

Mayo told its staff that it would need to reduce pay to keep the business afloat. And some positions were eliminated entirely, including Kosiorek’s.

She decided to turn her part-time passion — running the social media accounts for her son’s high school sports teams — into a full-time business.

“It was like this big gong was going off saying, ‘Sara, what are you doing? What ladder am I climbing and why do I miss out on so much of my son’s life because of it?’” said 51-year-old Kosiorek, who is now the founder of Academia Media, a boutique agency that offers social media and communication services to K-12 schools based out of Minneapolis.

Whether out of inspiration or necessity, many women like Kosiorek turned to entrepreneurship during the pandemic. Between 2019 and 2020, the share of female founders on LinkedIn grew by 35%, according to a recent analysis of LinkedIn data. By comparison, the share of male founders grew by 19% during that period.

Education has been one of the top industries for new female founders, including Kosiorek. In 2020, the sector accounted for the largest uptick in the founding rate among women on LinkedIn. And it took the No. 2 spot in 2021, second only to finance. 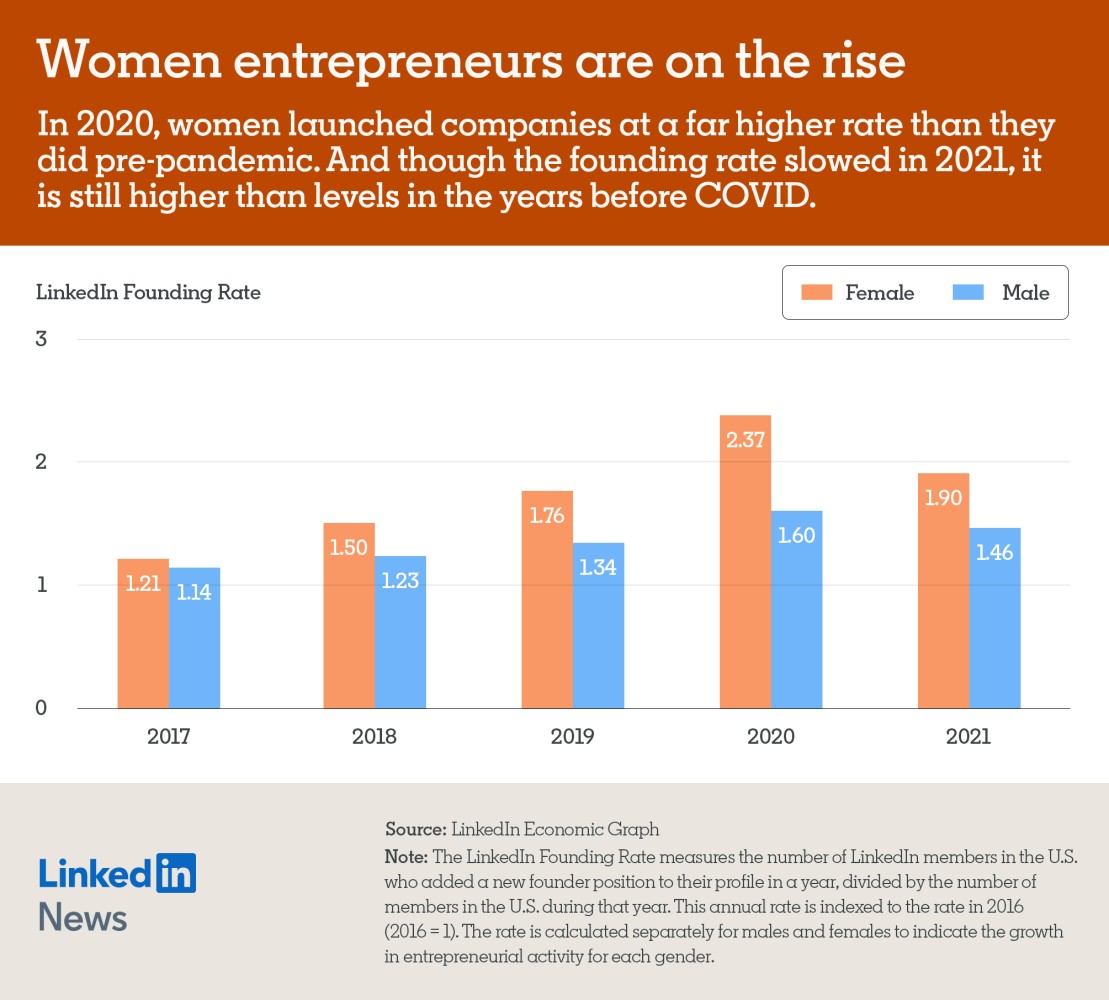 While the rise in female entrepreneurship is a positive trend in itself, it masks a disturbing reality: Pre-pandemic, the typical workplace simply didn’t work for working women. This fact has pushed many women to start their own companies. And with industries like education, retail and health care facing considerable upheaval during the COVID-19 crisis, many women launched businesses after losing their jobs.

“Across the board, corporate culture was leaving women behind,” said Sruti Bharat, the interim CEO of the female founders platform All Raise. “Rather than trying to climb this ladder to nowhere … women are saying, ‘I might as well strike out on my own.’”

Small businesses account for 99% of U.S. companies, and over 70% of those small firms have no employees. Cate Luzio, the founder of women’s network Luminary, said as soon as the pandemic began, she saw a massive uptick in members of Luminary starting their own solo enterprises. Luzio recalls seeing a similar trend after the 2008 recession, when more men lost their jobs than women.

During the pandemic, however, women — particularly women of color — lost a majority of the jobs. And so it makes sense that women are launching new businesses at a faster rate. The top reason Black female entrepreneurs started businesses during the pandemic was to financially support themselves and their families, according to a recent LinkedIn survey.

“Often you would be celebrating women becoming entrepreneurs, but they felt forced to go out and do their own,” said LeanIn CEO and Co-Founder Rachel Schall Thomas.

Erika Moore didn’t start her New York City consulting businesses after losing a job. In fact, she continued her full-time job while launching her firm. But her new venture’s fortune has come as a direct result of the pandemic.

ReCreateIt provides development training, interactive workshops and one-on-one coaching for companies like Google, software startup Plaid and more. A diversity, equity and inclusion officer, Moore said the pandemic and the murder of George Floyd in the summer of 2020 shined a light on the importance of DE&I, creating a much bigger market for a business like hers.

“Black women are recognizing our skill set and we are stepping into our confidence,” she said. “It is a shame that it took the murder of George Floyd to show that we are being woefully compensated with what we contribute to these organizations.”

‘The penalty for failing is so much larger’

While most female-founded small businesses plan on staying small, there is a select group of women founders who aim to scale their firms to a point where they can secure venture capital. During the pandemic, few female founders have managed to pull this off: Women founders raised only 2% of all venture capital in the U.S. in 2021, the smallest share since 2016. In the same time frame, there has been only a slight increase in the amount of capital going to startups with male and female co-founders, but the amount going to solo female founders has remained stagnant.

Bharat’s All Raise attributes the stalled progress to ingrained bias in the venture capital process. Relying heavily on pattern matching, VCs seek founders who have similar backgrounds to those who they have successfully invested in before. That means VCs are relying on a past data set of mostly white male founders.

The way women tend to approach risk and failure may also be stymying their fundraising efforts, Bharat notes. While failure is all-too common part of the entrepreneurial process, female founders tend to shy away from promising investors more than they are certain they can deliver. That makes their business model appear less attractive to venture capitalists.

“Many of these women are not showing up to their pitch and say they are building the next billion-dollar business,” Bharat says. “They know if they pitch that and they fail, the penalty for failing is so much larger.”

In June of 2021, Joanna Smith-Griffin raised $8 million in a Series A round of venture capital to grow her education startup, AllHere. Griffin, who is Black, says the main barrier keeping female founders of color from raising venture capital comes down to access; to both networks and tactical advice on how to make their business pitch work with VCs.

To secure those key elements, Griffin participated in startup incubators hosted by Harvard University, AT&T and Google while she was building AllHere. Without those experiences, she says she may not have been able to grow her startup to the 8500 schools across 40 states it reaches now.

“Raising capital can seem like this mystical code where only a few people have the answer,” she said. “The best advice I got along the way was do it afraid, and do it anyway.”

Griffin is particularly encouraged by the rise of Black female entrepreneurs fighting that fear and starting their own companies, particularly during the pandemic. The 31-year-old said soon after she raised her Series A last year, her LinkedIn inbox was filled with messages from underrepresented founders like herself who were inspired by what she was able to achieve.

“Sometimes, it is just knowing that someone else has done it and is further along than you are that can help you get the courage to do it as well,” she added.

As for Kosiorek’s Academia Media, she’s not planning to raise venture capital anytime soon. But the fact that she can call herself an entrepreneur, and support herself financially while doing what she loves, is more than enough for now.

“Maybe we all just needed that kick in the pants from the pandemic to say ‘do it’,” she said. “I know I wouldn’t have done it otherwise.

The VC landscape is dire for Black women. 7 Black women who have raised millions in funding reveal their best fundraising advice.

Support all students on the path to and through school with conversational AI.